What our clients say

"The extraordinary effort that has been exerted by the staff, and we specially thank Dr. Hassan Mohsen Alhais. Wishing your continues success & excellence"

With over 17 years' extensive experience practising as a legal consultant, Dr. Hassan Mohsen Elhais has a wealth of knowledge and experience within the legal sector.

Dr. Elhais has also been an invited speaker at various international conferences in France, Germany, the Czech Republic, Italy, London and Hong Kong, among others, to talk on legal issues involved in real estate, family law, business administration and other professional issues.

years in the market

offices in the UAE

Dr. Hassan Elhais was recently featured in prominent international news sites The Associated Press, Bloomberg, The Washington Post, and U.S. News regarding his statements about a major change in the UAE where British court rulings will now be enforced – a move that could affect the city of Dubai’s status as a haven for the world’s wealthy.

Dr. Hassan Elhais, along with his team of legal consultants and prominent local lawyers across the UAE, has made a name for himself as a renowned specialist in the fields of civil law, company incorporation, construction law, maritime law, banking law, criminal law, family law, inheritance law, and arbitration.

Dr. Elhais has won awards and accolades naming him the Legal Consultant of the Year 2016 by Professional Sector Network.

After qualifying as a lawyer by profession, and after years of successful practice within the field of criminal and public law, Dr. Elhais moved to Dubai in 2006, where he has continued to build his business as a legal advisor. Dr. Elhais has made it his goal to make Al Rowaad Advocates one of the best law firms in the UAE. Working exclusively with Al Rowaad Advocates & Legal Consultancy, Dr. Elhais is an effective leader of the company, It's spokesperson, and driving force. He has a strong ethical stance with regards to the place of the law firm, from clarity on the legal processes through to the fee system.

Specializing in the drafting of all statements of claim, memos and consultation on litigation of all manner, Dr. Elhais has worked his way through the ranks of Al Rowaad Advocates since joining as a legal advisor, to his current role as the law firm leader.

He has drafted and supervised the drafting of many cases across all areas of law over the past decade.

Dr. Elhais has also been an invited speaker at various international conferences in France, Germany, Japan, South Africa, Denmark, the Czech Republic, Italy, London and Hong Kong, among others, to talk on legal issues involved in real estate, family law, business administration and other professional issues. See the gallery.

He also has completed training with the Law Society of England and Wales. 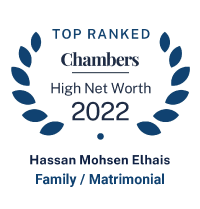 I am humbled that our last success stories of the clients whom we advised and assisted to get their rights, were monitored by many newspapers and media. Please feel free to read few of our success stories below:

A form of alternative dispute resolution outside the court process. The parties to a dispute refer it to arbitration and agree to be bound by the arbitration decision.

Dr. Elhais has advised large international banks including Emirates NBD and Dubai Islamic Bank on commercial matters within the UAE.

With strength in complex, multi-jurisdictional cases, Dr. Elhais is an excellent practitioner, distinguished by his breadth of expertise across all aspects of civil law.

Drafting complex agreements, memorandums of understanding, and subcontracting agreements are just some of his skills in this field.

With his team of dependent Family Lawyers in Dubai will provide you strategies that would be beneficial in your cause.

Drafting complex legal wills and guardianship custody agreements is just one of his unparalleled skills in inheritance law.

Dr. Elhais has advised many clients in maritime disputes, including in arrest and seizure of vessels, maritime pollution, and maritime insurance.

Dubai resident cleared of drug possession and use

Client Questions & Answers allows you to connect with Dr. Hassan Elhais to ask or answer questions about the services.

You can ask questions about a legal matters and drafting of all statements of claim, memos and consultation on litigation of all manner.

...the extraordinary effort that has been exerted by the staff, and we specially thank Dr. Hassan Mohsen Alhais.
Wishing your continues success & excellence...

We are extremely happy to note that you won all three cases which we entrusted to you. Your superb handling ensured the result in our favour. We very much appreciate this and feel grateful to you. You not only won the cases, but managed to get the judgement executed without much delay. You and your colleagues have acted with remarkable efficiency and competence. During this period, we found all your staff to be very helpful, courteous and co-operative. Please convey to them our appreciation and thanks. We thank you most sincerely and wish you and your firm all the best in the years ahead.

Dr. Hassan Elhais is among the best legal consultants I have ever worked with. He has an amazing ability to reduce complex issues into a simple concept that non-legal people can understand. He consistently develops innovative litigation strategies that help us to achieve our ultimate legal goals.

I believe everyone should recognize what a difference Dr. Hassan Elhais work has made to people's lives; and especially to our family's life, because we will remain forever grateful to each and every one of his team.

Dr. Hassan Elhais never fears cases that involve exposure and he always gives me his honest assessment of our chances of success, which is invaluable to me.

He aided us not only in providing legal advice but also in all legal issues that required a long term strategic approach to achieve most favorable and optimum outcomes he provided us with high level of professional service.

Dr. Hassan Elhais is a responsible, reputable counsel who operates to high levels of service.

Dr Hassan Elhais is responsive, thorough and creative with his advice, and is a valued advisor and legal consultant.

Regardless of the complexity of the matter I know Dr. Hassan Elhais will consider not only legal strategy but also business practicalities in providing advice and litigation options.

I recommend Dr. Hassan Elhais to anyone who says 'I'm in legal trouble'. I was extremely satisfied with the high standard of his work. He has always been there when I have needed him and I refer all my clients, family and friends to him/his firm.

I owe the success of my case to Dr. Hassan's diligent approach. He remained focused, put me at ease and always went the extra mile. Dr. Hassan tirelessly put my case in the best possible light and I cannot thank him enough. I would highly recommend Dr. Hassan - I am grateful to him from the bottom of my heart.

Expertise in law comes with tremendous experience gained in the field of law with a number of years of successful practice. Specialized lawyers make their mark is their chosen stream of law by being able to bring an unparalleled wealth of information and legal tactics for the benefit of their clients. The making or breaking of a case is often determined by your choice of legal advisor in UAE. When choosing the right lawyer for your case you should select the most acclaimed lawyer UAE or best lawyer in Dubai. You should also only select a full- service law firm that can provide you the services of both advocates and legal consultants in Dubai. It is often difficult for clients to be able to find the right law firm or the best legal consultant in Dubai that can guide them in their varied legal requisites whether related to corporate & commercial matters, criminal & civil matters, personal matters etc. It is therefore highly beneficial to obtain the services of a full-service law firm in UAE that can provide the services of expert advocates in UAE and can assign the right legal team to provide the best professional services.